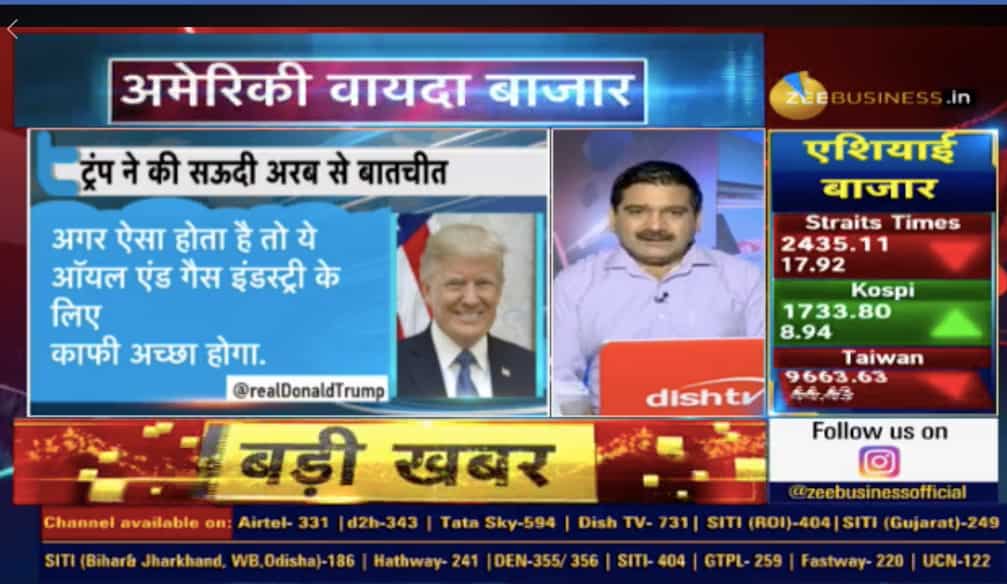 On account of rise in the crude oil price to the tune of nearly 25 per cent after the US President Donald Trump’s tweet on production cut by Saudi Arabia and Russia, Zee Business Managing Editor Anil Singhvi said that through such tweets US President is not doing good for any of the stakeholders involved in the oil business.

Just spoke to my friend MBS (Crown Prince) of Saudi Arabia, who spoke with President Putin of Russia, & I expect & hope that they will be cutting back approximately 10 Million Barrels, and maybe substantially more which, if it happens, will be GREAT for the oil & gas industry!

Anil Singhvi said that Donald Trump should have known that without having any concrete deal with Saudi Arabia and Russia, such an announcement was completely unwarranted and would certainly degrade the value of the White House in the global economic affairs.

Anil Singhvi said, “By tweeting such information without having any deal with either Saudi Arabia and Russia, Donald Trump has downgraded himself and the respect that the White house commands in the global economy. Now, when both Saudi Arabia and Russia have said that no such deal happened with the US on oil production, the oil prices are going to tank again and people are going to lose huge amount of money in this artificial rise in oil prices due to the recent tweet of Donald Trump.”

Decoding the Trump strategy that might have worked in favour of the US economy, Anil Singhvi said, “US government has a vested interest in the global crude oil price and there are possibilities that Donald Trump tweeted such false information ahead of the US job date announcement to keep the oil price at a certain level that helps US economy and keep their markets on the higher side. But, such tweets in the global economy are not going to work for long-term and finally, they are going to harm both the US and the global economy.”