U.S. retail sales for the month of March dropped 8.7%. Economists had been expecting a drop of 8%. The Dow is now set to open 475 points lower. – Stevens

Global cases of the coronavirus have reached nearly two million with 1,996,681 infections, according to Johns Hopkins University. About 127,590 people have died from COVID-19 around the world. In the U.S., 609,685 people have contracted the fast-spreading virus and more than 26,000 Americans have died.

On Tuesday, President Donald Trump announced that he is going to withdraw U.S. funding for the World Health Organization. He has accused the organization of making mistakes in its approach to the virus. However, some have criticized the White House for what they see as an inadequate response to the crisis. – Fitzgerald

8:28 am: Citigroup’s first-quarter profit tumbles 46% as it sets aside more money for loan losses

Citigroup reported Wednesday a sharp drop in its first-quarter profit as the bank built its loan-loss reserves to cushion the blow from the coronavirus outbreak on its business. The bank earned $1.05 per share, down from the $1.87 earned in the same quarter a year earlier. Revenue rose 12% year-over-year to $20.7 billion, due to higher fixed income and equity markets trading revenue.

Wall Street had anticipated earnings per share of $1.04 on revenue of $19 billion based on Refinitiv consensus estimates. However, it’s difficult to compare reported earnings to analyst estimates for Citigroup, as the coronavirus pandemic continues to hit global economies and makes earnings impact difficult to assess. Citigroup shares fell 3.1% in the premarket. – Imbert, Stevens

8:17 am: Oil drops to lowest level since 2002 as IEA predicts crude demand will hit 25-year low in April

U.S. oil fell to its lowest level in more than 18 years following the International Energy Agency’s monthly oil market report, which predicts that demand for crude in April will drop 29 million barrels per day year-over-year. The widely followed report said that April’s demand level could be the lowest since 1995, while forecasting that global oil demand will fall by 9.3 million bpd for the full year. The coronavirus pandemic has wreaked havoc on the oil market, sapping demand as worldwide travel slows and businesses shutter their doors. West Texas Intermediate, the U.S. benchmark, dropped to $19.20, its lowest level since Feb. 1, 2002 following the report. The contract later pared some of those losses and traded 2.3% lower at $19.65. Brent crude, the international benchmark, fell 3.7%, or $1.09, to trade at $28.51 per barrel. – Stevens

7:59 am: Airlines jump after reaching aid agreement with Treasury Department

Shares of major airline companies surged in premarket trading on Wednesday after the companies reached deals for portions of $25 billion in payroll grants to help weather the coronavirus. American and United Airlines jumped 9.5% and 7.5%, respectively, while Delta and Southwest both rose more than 6%. The relief program requires that airlines not furlough or cut employees’ pay rates through Sept. 30. The grants were part of the more than $2 trillion coronavirus relief package. – Li

7:44 am: Bank of America profit slides due to expected coronavirus losses

Bank of America reported quarterly profit that disappointed Wall Street, sending shares down 2.3% in premarket trading. The second largest bank by deposits in the U.S. said it earned 40 cents a share, down 45% as BAC set aside $3.6 billion for anticipated loan losses due to the coronavirus pandemic. Analysts had been looking for 46 cents a share. Revenue of $22.8 billion was roughly in line with estimates, while trading volume easily beat estimates. – Cox

7:36 am: Trump says some states could ‘reopen’ before May

President Donald Trump said Tuesday evening that he believes some states will be able to lift social distancing rules and “reopen” their economies by the end of April. Trump said he “will be speaking to all 50 governors very shortly” and “will then be authorizing each individual governor of each individual state to implement a reopening.” His announcement came a day after the president claimed “total” authority over when to lift state-imposed coronavirus public health safety measures. Though many congressional lawmakers are eager to alleviate the economic pain caused by forced business closures in their states, public health officials warn that to ease rules now could yield a rebound in new COVID-19 cases in the U.S. — Franck

Tesla traded 6.2% higher after an analyst at Goldman Sachs initiated the electric car maker with a buy rating and a price target of $864 per share. “We are positive on Tesla because we believe that the company has a signiﬁcant product lead in EVs, which is a market where we expect long-term secular growth,” Goldman Sachs auto analyst Mark Delaney said in a note to clients. —Fitzgerald, Imbert

7:23 am: Stock futures point to losses at the open 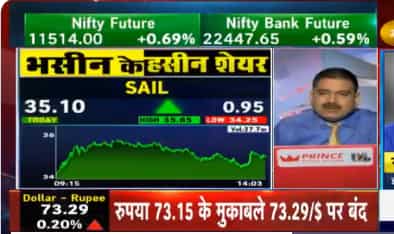