Check out the companies making headlines in midday trading Tusday:

Occidental Petroleum, APA Corp — Energy stocks gained after the White House announced the U.S. will release 50 million barrels of crude from the Strategic Petroleum Reserve. The move is a coordinated release between several countries, including China and Japan. Occidental Petroleum and APA Corp gained more than 6% each.

Dollar Tree — Shares of the discount retailer added 5.5% after the company reported its latest quarterly results. Dollar Tree also said its freight costs for the quarter were much higher than it anticipated, but it still reported a revenue beat.

Best Buy — The electronics retailer saw its shares plummet more than 16% after delivering a holiday comparable sales forecast that was largely below those of Wall Street analysts amid weakening demand and shipping bottlenecks. That weighed on investors despite Best Buy reporting a quarterly beat on the top and bottom lines.

Dick’s Sporting Goods — Shares of the sporting goods giant dropped more than 10% despite a stronger-than-expected quarter report.  The company posted fiscal third-quarter earnings that outpaced analysts’ expectations, which led it to hike its annual forecast. Dick’s stock had been on a tear this year, rising nearly 150% year to date before Tuesday’s sell-off.

Abercrombie & Fitch — The apparel retailer saw its shares drop more than 15% after the company said its profit margin dropped by 30 basis points in the previous quarter.

J.M. Smucker — The food producer’s shares rose more than 4% after the company reported quarterly earnings of $2.43 per share, beating the Refinitiv consensus estimate of $2.05 a share. Revenue also beat forecasts and Smucker raised its full-year forecast. 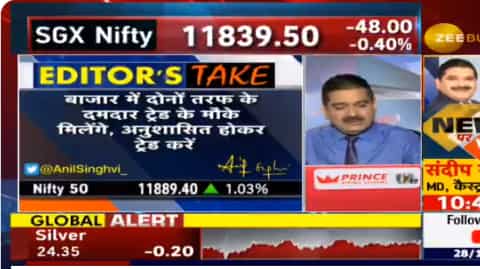 Opportunity for two-way trade over next 2 sessions, Anil Singhvi says; know what will be key to success